Create a Lens based on a mural in my local community.

A Lens is based on the mural “Portals to Memory” located in the El Segundo Public Library, created by Nanibah Chacon in conversation with Mercedes Dorame and the El Segundo Community.

Portals to Memory is inspired by the art of Nanibah Chacon, the idea of living harmoniously with nature and with gratitude.

I proposed the concept for this Lens in my application for the Snap Lens Academy. Diné and Chicana artist Nanibah Chacon created this site-specific mural together with community members. When so much of what modern design is done without collaborating or understanding local communities, the process Chacon uses to create her mural is the complete opposite. Even when we don’t normally think about collaborative design when it comes to murals, Chacon has immersed in the El Segundo community, and heard from the locals before creating the work, some residents also helped with painting the mural. Chacon has done this even though America as a whole has refused to listen to the original owners of its land while designing the country for the needs of the people in power. I understand from the process of this painting a part of how to do art and design in a just way is to always respect the context and invite those being affected by the design into the design process.

I wish this mural was outside the walls of the library, where it can be seen by all people passing through or living in El Segundo everyday. It is a powerful reminder that we are all living on stolen land, and that the privilege that landowners hold now is built on the blood and tears of many communities. During the COVID19 pandemic, the library closed its doors and the Portals to Memory mural was also barred from the public, making it even harder to access. Chacon has said in interviews that she chooses murals as a medium because she believes art should be public and accessible to all instead of being relegated to exclusive spaces. The fate of being locked in the library is not one intended for the mural. Because of this, I would like to create a lens in collaboration with Chacon to bring her mural out into open space from the enclosure of the Library to the Library park, where El Segundoens love to gather, walk their dogs, and play.

Based on this concept, I created a mock up in Photoshop to show what it might look like in Augmented Reality: 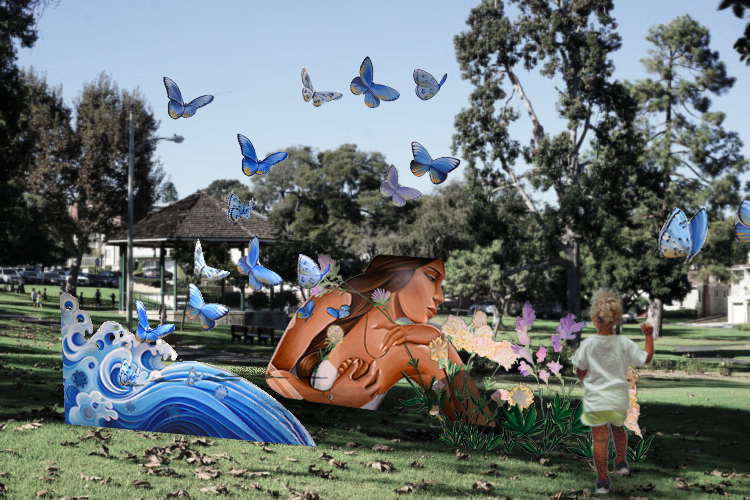 My teammates and I during the Snap Lens Academy decided to move forward and further work on this concept our Lens. We created a storyboard of how the animations would work, and what interactions we can include in the Lens.

To understand the context around the Mural, my team conducted secondary research on the history of the Tovanga, and on the Artists. Below is an excerpt from a presentation we showed at the Lens Academy about the artist Mercedes Dorame, who collaborated with Nanibah Chacon on the creation of the mural. We are grateful that the directors at ESMoA (an art laboratory in El Segundo), Holly M. Crawford (They/Them/Theirs) and Barbara Boehm were also able to provide us with support and guidance. 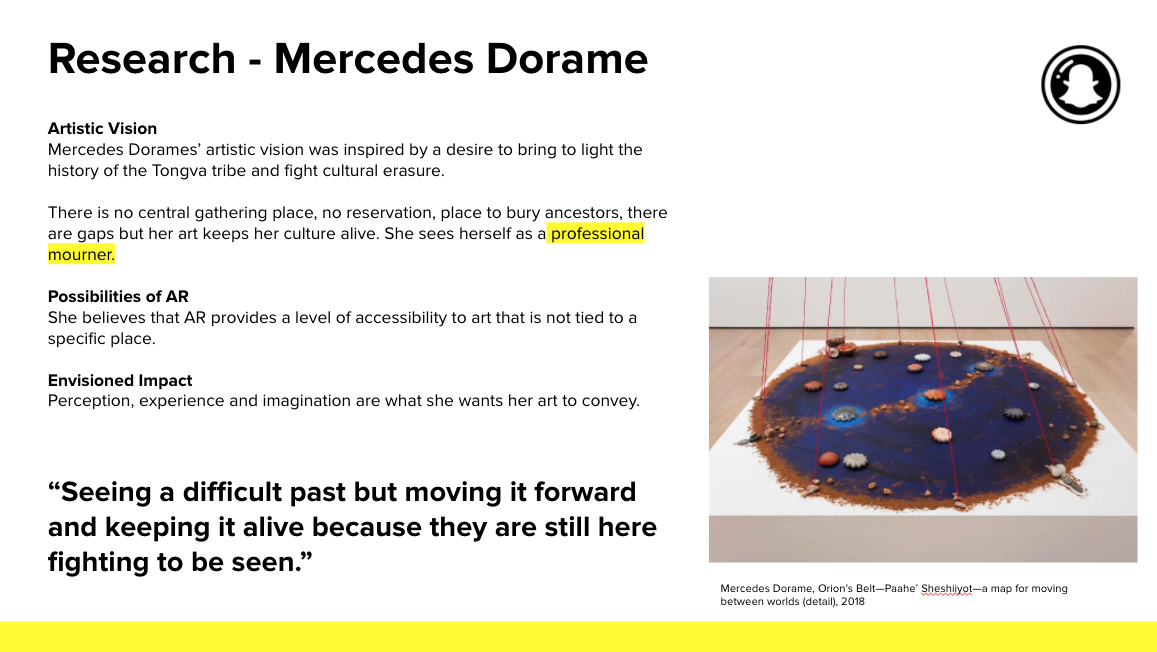 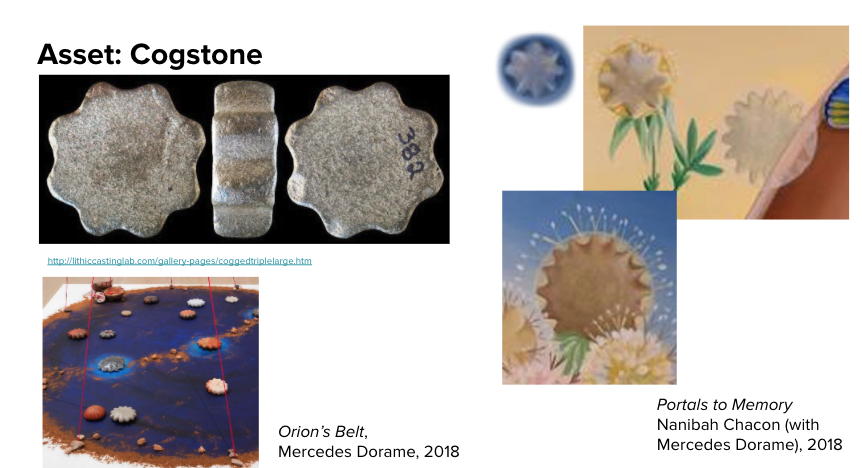 We met with Nanibah Chacon to talk about the Lens, and gained further insight on the mural.

Meaning of the mural
‍It is about the preservation and interconnectedness of landscape and people. It is a reflection and celebration of the natural environment around El Segundo. The land is under environmental siege with the airport, the hyperion plant… its unique coastal climate based around the blue butterfly and the buckwheat is under threat. They are all connected. When you lose one of them, you lose more, and we end up losing ourselves as well.

‍Cogstones - need to put more, and around the users  in face lens.
‍Use the cogstones to bring the whole space together. They are objects of the Tongva people. We don’t know the purpose of them because colonization has wiped that memory out of everyone. Even though we don’t know the precise meaning, they are beautiful and we know objects we make are reflective of our nature in art and in science. Ancient technology and art gets lost, but we need to remember that there were thriving communities for centuries [before colonization].

I worked on the asset creation for the mural, and prototyping the Lens for testing.

Version 1 of Prototype
Our first prototype of the Lens has some Glitches, and is not yet immersive enough.
We collected feedback from our cohort at the Lens Academy, from our mentors at Snap and at LACMA, and from our instructors.

Version 1 of user flow
Our testing focused on understanding the opportunities for improvement in our current user flow.

After testing with local park visitors, I created a journey map with pain points and opportunities of improvement. 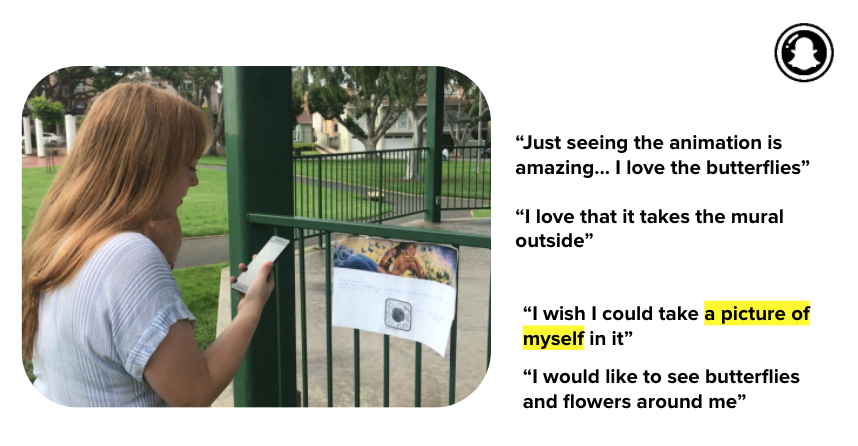 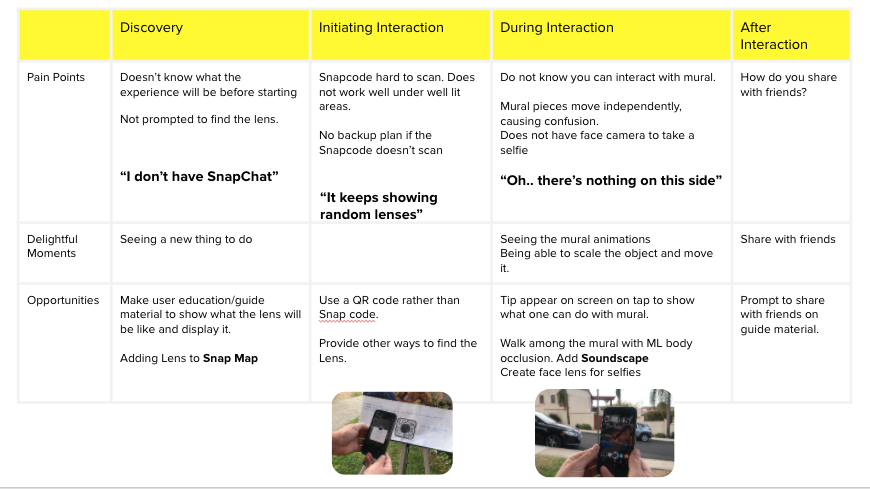 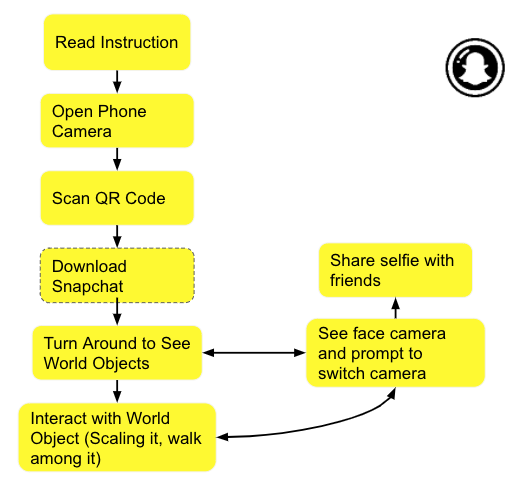 Version 2 of user flow
With the research, my team aligned on a new user flow for our Lens. 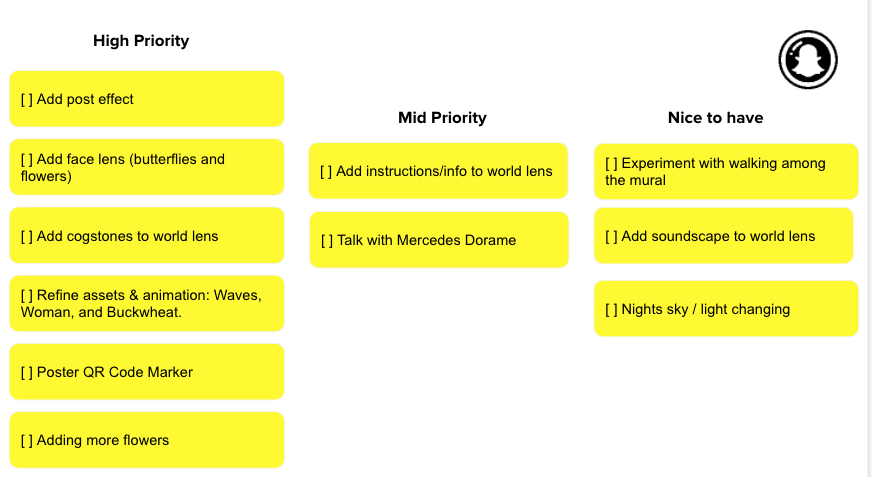 Feature Priorities
Collaborating with our mentors from Snap, we came up with a priority list of features we'd like to develop for the Lens.

We imagine the users would scan the QR code on a physical object to see the Lens in the El Segundo Library park. Casey and I created poster and environment concepts for the physical object. 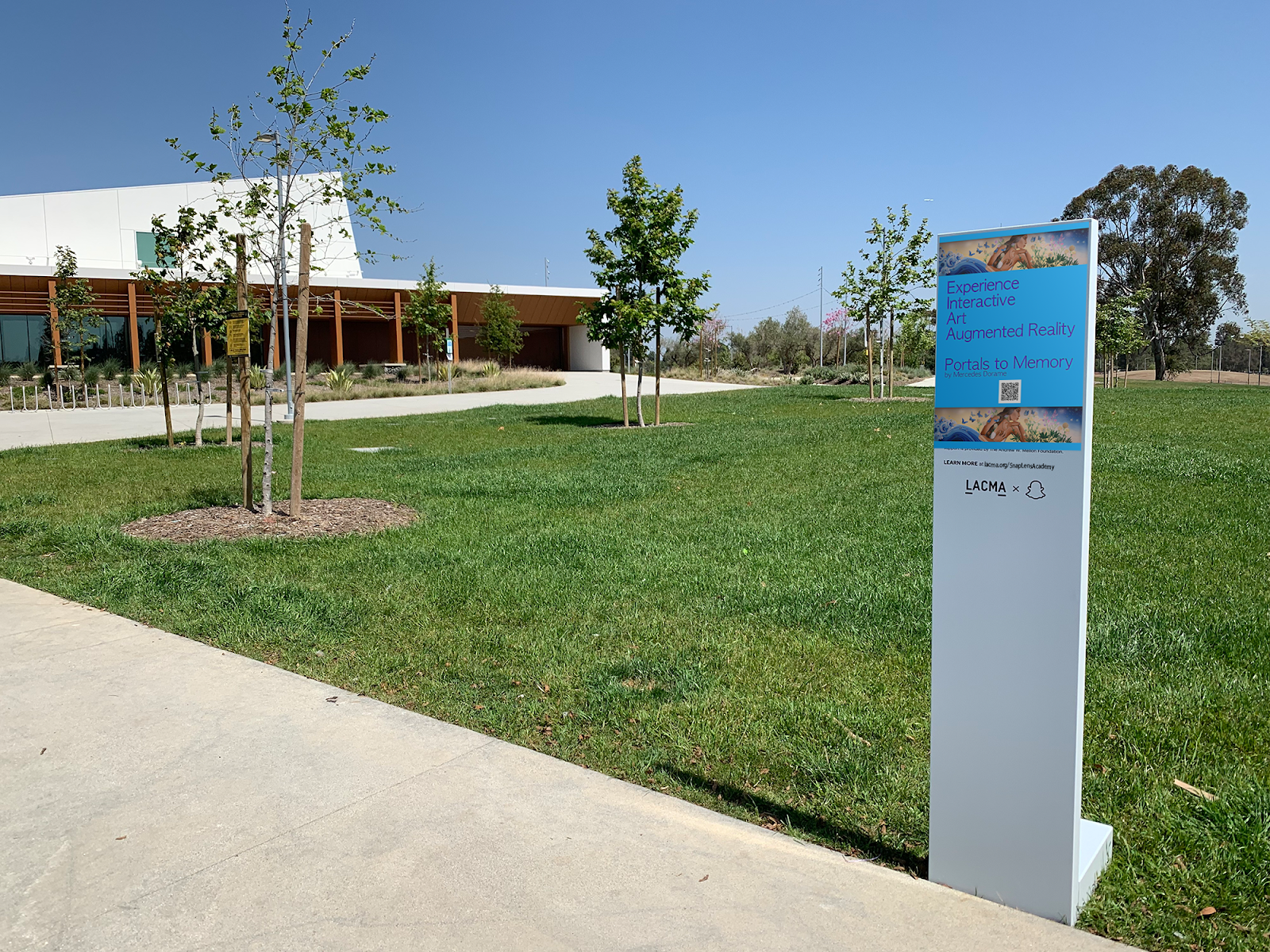 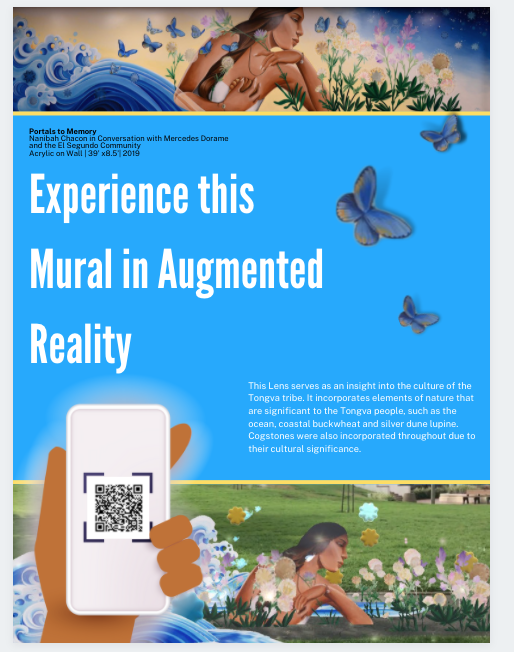 During a concert in El Segundo, we placed the poster on display in the Library park for people to freely interact with it. 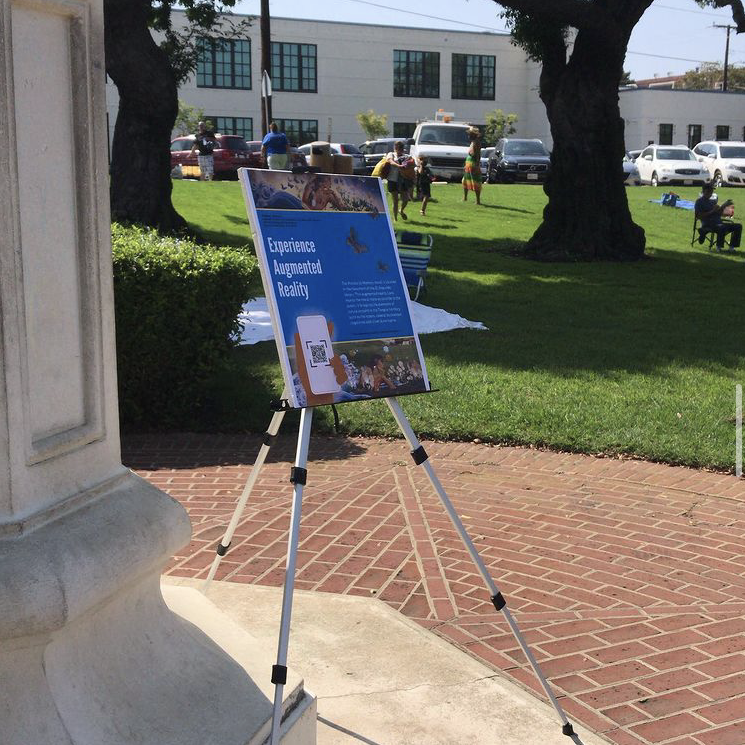 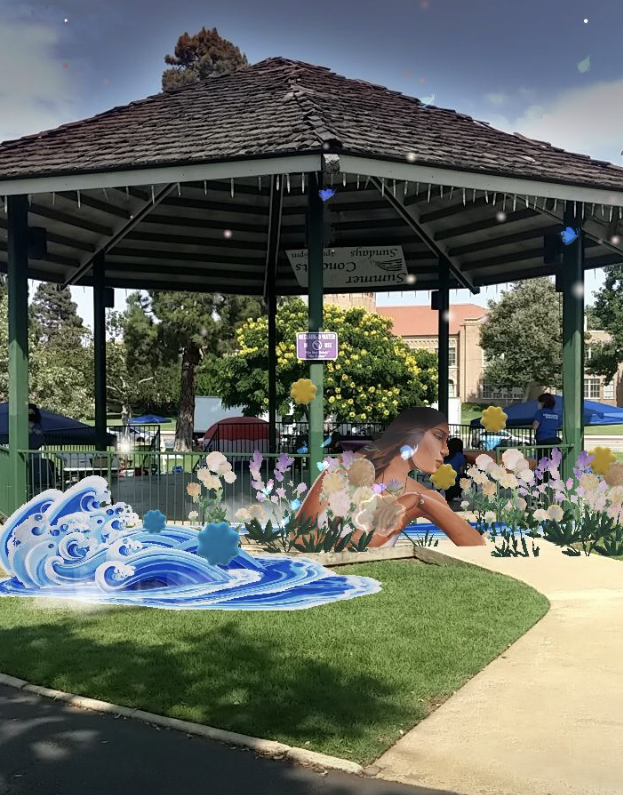 Collaborative art is productive
We typically think about art as a solo adventure. However, it doesn't have to be. In this project I worked collaboratively with my teammate Casey, as well as mentors from Snap and LACMA. The experience has be extremely rewarding. By collaborating with others, I felt more motivated and able to be more creative. I would love to explore collaborative art in the future.
Critical design encourages conversation
Progress in technology such as in the AR space is usually framed as serving the purpose of making human lives easier. However, art is extremely important to help us reflect on the use of technology, while technology can also become a medium for creating art.
Art and technology are in service of each other
The Portals to Memory Lens created interest in the El Segundo art culture, but also calls to question the way the city handles public art. This work created an opportunity to have a discussion. During the final presentation of the work at Lens Academy, viewers started using the hashtag "free the mural" and repeating it. Some people reached out to me afterwards asking how they can help the mural become public. I thought it was extremely heart-warming to see. I wonder if critical design could be something that leads to community action.